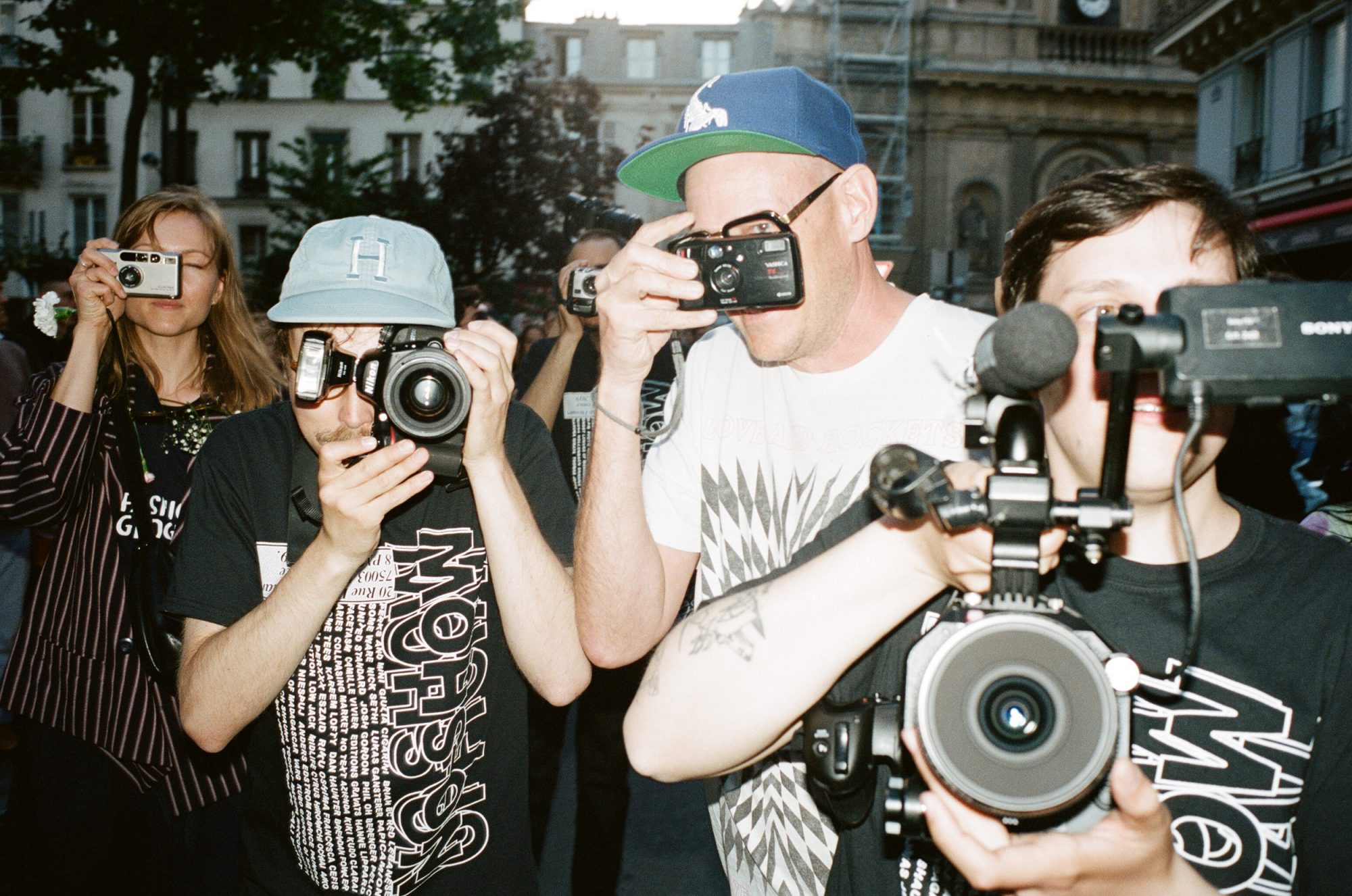 The Nexus can Hold: an interview with Shauna Toohey of P.A.M.

P.A.M. have never had much respect for fashion industry conventions. Founded in 2000 by partners Shauna “Mini” Toohey and Misha “Perks” Hollenbach, the label has developed a freewheeling abstract aesthetic, with collections that combine cryptic internet-age imagery and formal experimentation in maximalist ecstasy. Yet it’s more than P.A.M.’s designs that have gained the label a cult following; with their unpredictable collaborations and regular art world incursions, Toohey and Hollenbach have continually refused to allow their vision to be circumscribed by the designation ‘fashion label.’ This wasn’t a calculated expansion into other domains; named after their respective graffiti aliases, Perks and Mini has always been a channel through which Toohey and Hollenbach pursue a variety of interdisciplinary projects, often in collaboration with creative friends they’ve made along the way. Now back in Naarm/Melbourne after five years based in Paris, rather than obstruct the creative network they’ve built over twenty years, the pressures of the pandemic-era have revealed the global extent of the P.A.M. family. With the recent launch of P.A.M.’s Good Life collection, co-founder Shauna Toohey spoke to us about rejecting cultural cringe, the label’s street-level anti-fashion show, and celebrating the simple things.

Moving back to Naarm/Melbourne from Paris amidst the pandemic last year must have been quite the upheaval. What has it been like being back in the city where you started P.A.M. 21 years ago?

Shauna: We thought we were coming back for five weeks; we’ve been here for one and a half years. I think like everyone we’re getting used to uncertainty; it feels like the ground’s moving under your feet. It’s hard to hold onto anything, to know what’s happening, to accept you can’t know what’s coming up. It really makes you live in the moment. It really makes you take advantage of every situation you find yourself in. You don’t know when you’ll have the same situation.

I’m very grateful to be in Oz during this period. I think on a community level people really look out for each other and do the best they can. I’ve seen so many examples of it during this pandemic. This community attitude has meant that I have found some positives to this world-changing situation. Returning to Melbourne I feel like the whole world has changed. It’s as though gravity doesn’t work in the same way anymore, so the Melbourne we find ourselves in now isn’t the one we left. 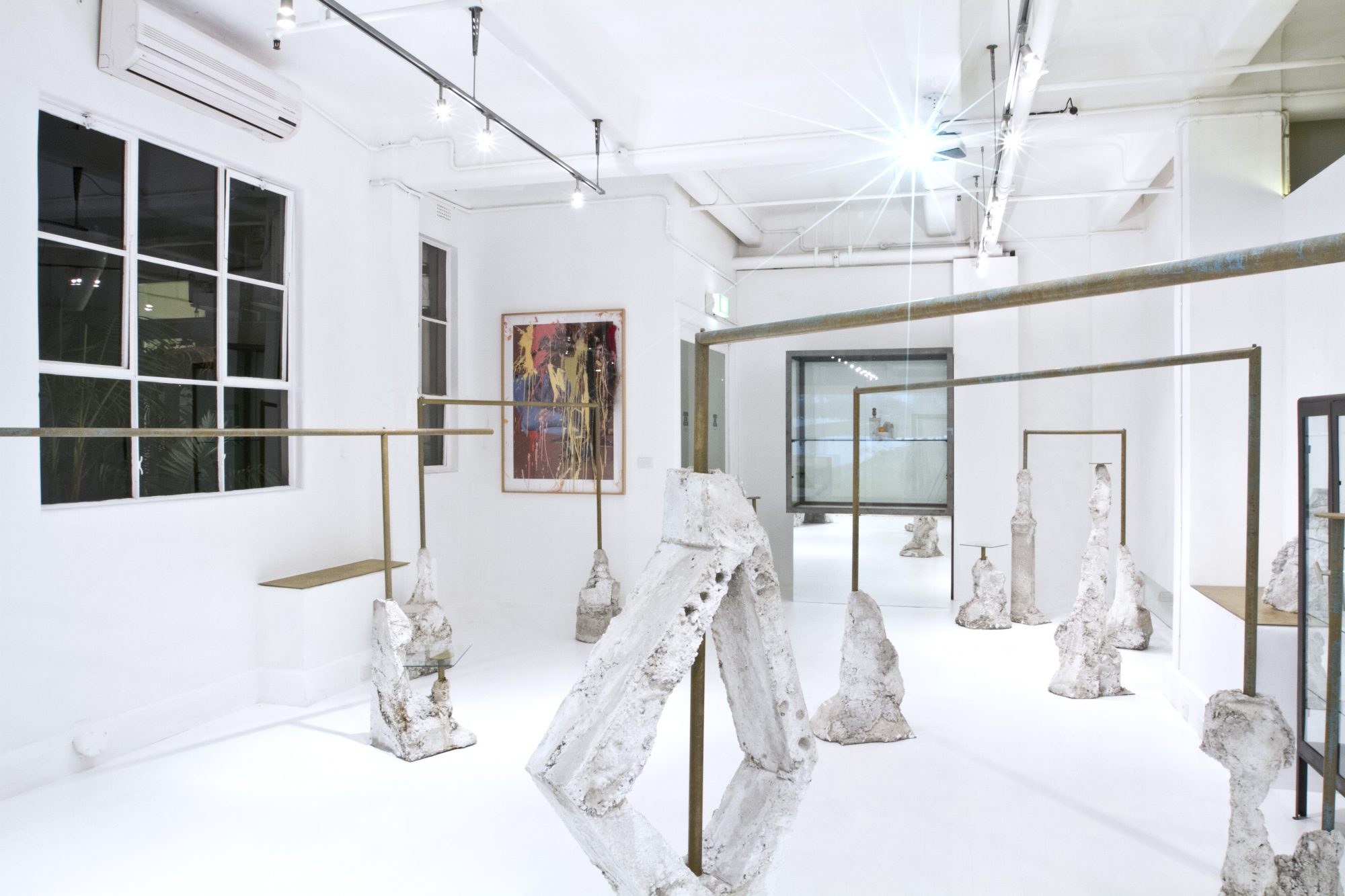 Is there anything in particular you learned in your time in Paris that has changed the way you look at Naarm/Melbourne, in terms of fashion, style, music, or otherwise?

Shauna: I don’t have a cultural cringe. I think there’s good action, inspiration, and people in both places. I think Paris offers us more opportunity simply because it’s so international and because of the sheer scale of industry and population. I am grateful to have started P.A.M. in Melbourne. It allowed us to make something unique without the noise or influence of other people. I think this foundation means we know what P.A.M. is and what it isn’t. It’s very easy to be true to it and that gives the brand a lot of authenticity and unexpected expressions. 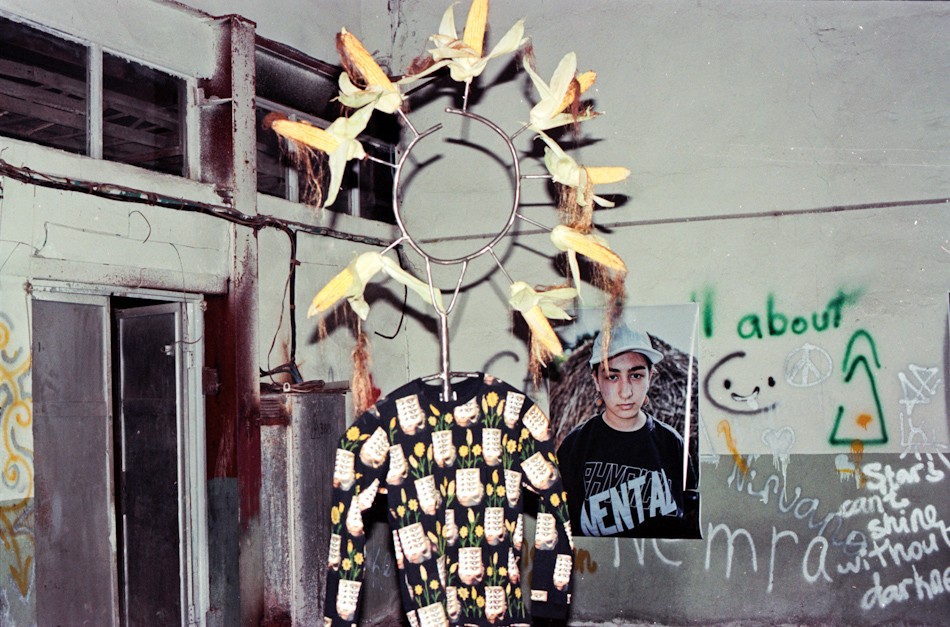 There have been a few designers, particularly in Europe, who have been doing really interesting things with upcycling recently. You’ve mentioned before that you’ve been increasingly incorporating upcycling into your practice with P.A.M. How do you see this evolving?

Shauna: I think any designer that’s conscious and living in the world would have a natural gravitation to up-cycling. It seems like a very natural response to me. I see myself as a designer not as an artist, therefore I see myself as a problem solver. Design isn’t just about the end product; it’s also about the process. That’s part of the story. We’ve been upcycling for 2 plus years now and will continue. It definitely has a place in P.A.M.‘s DIY DNA, and in our ethos. We enjoy doing it and our audience is responding to it also. 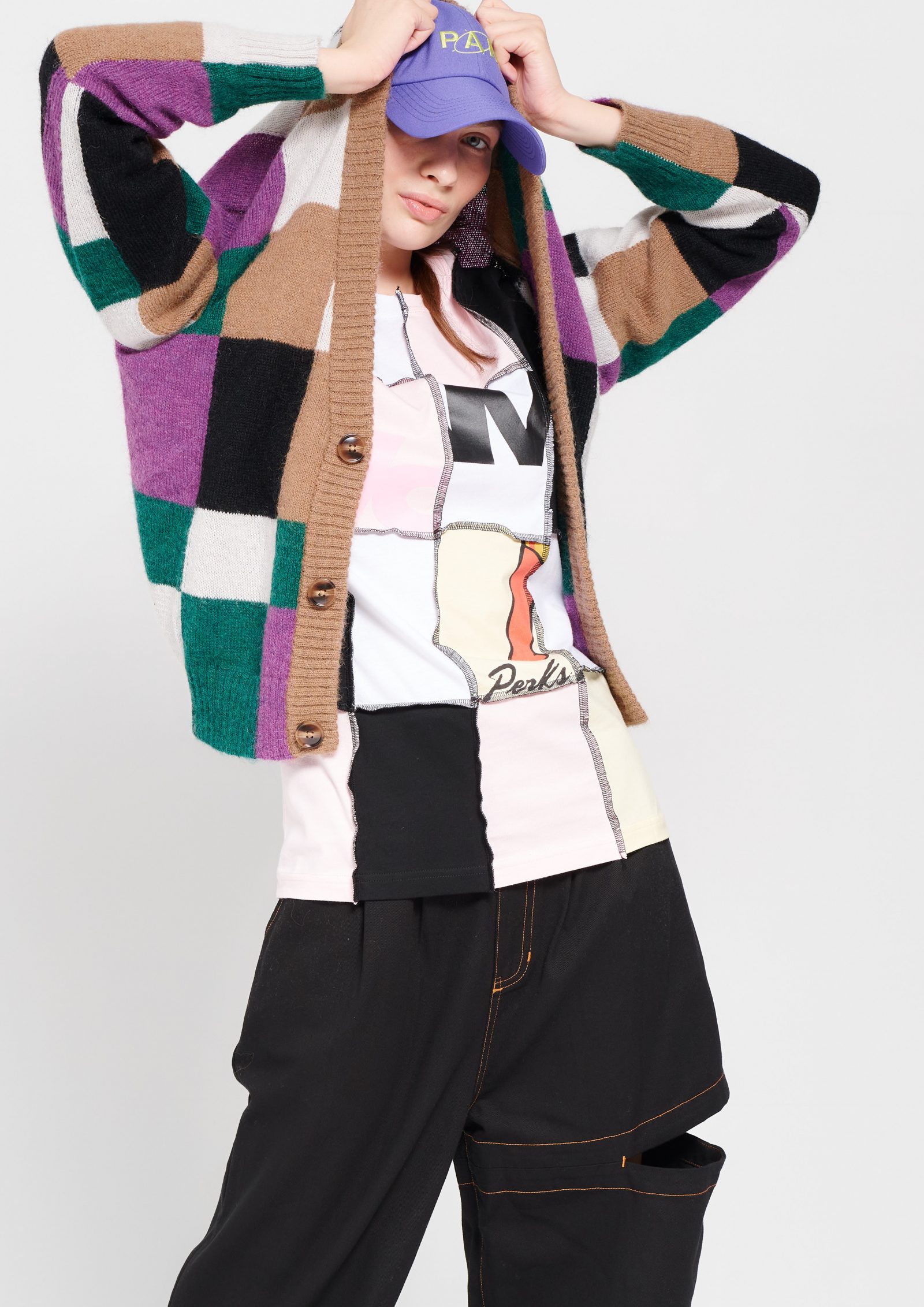 (Above) The P.A.M. Upcycled Grid T-Shirt

You’ve asserted before that you see P.A.M. as a way of communicating with the world. How has what you’re wanting to communicate changed over time?

Shauna: Yes I think it has. In more recent times it became more important to talk about the idea of community, the joy that you get when you do things together. We are living in times when there’s a lot of pressure on us as individuals. We think that’s a dead-end. There’s so much more joy, action, and satisfaction to be had when you do it with other people. The Paris Fashion Week presentation we put together with 7 other brands called ‘No Show Official’ was this idea in action, and the energy we collectively put in created thousands of times more energy. Humans are social creatures; we are at our best when we work together and co-operate.

(Below) photos from the ‘No Show Official’ event 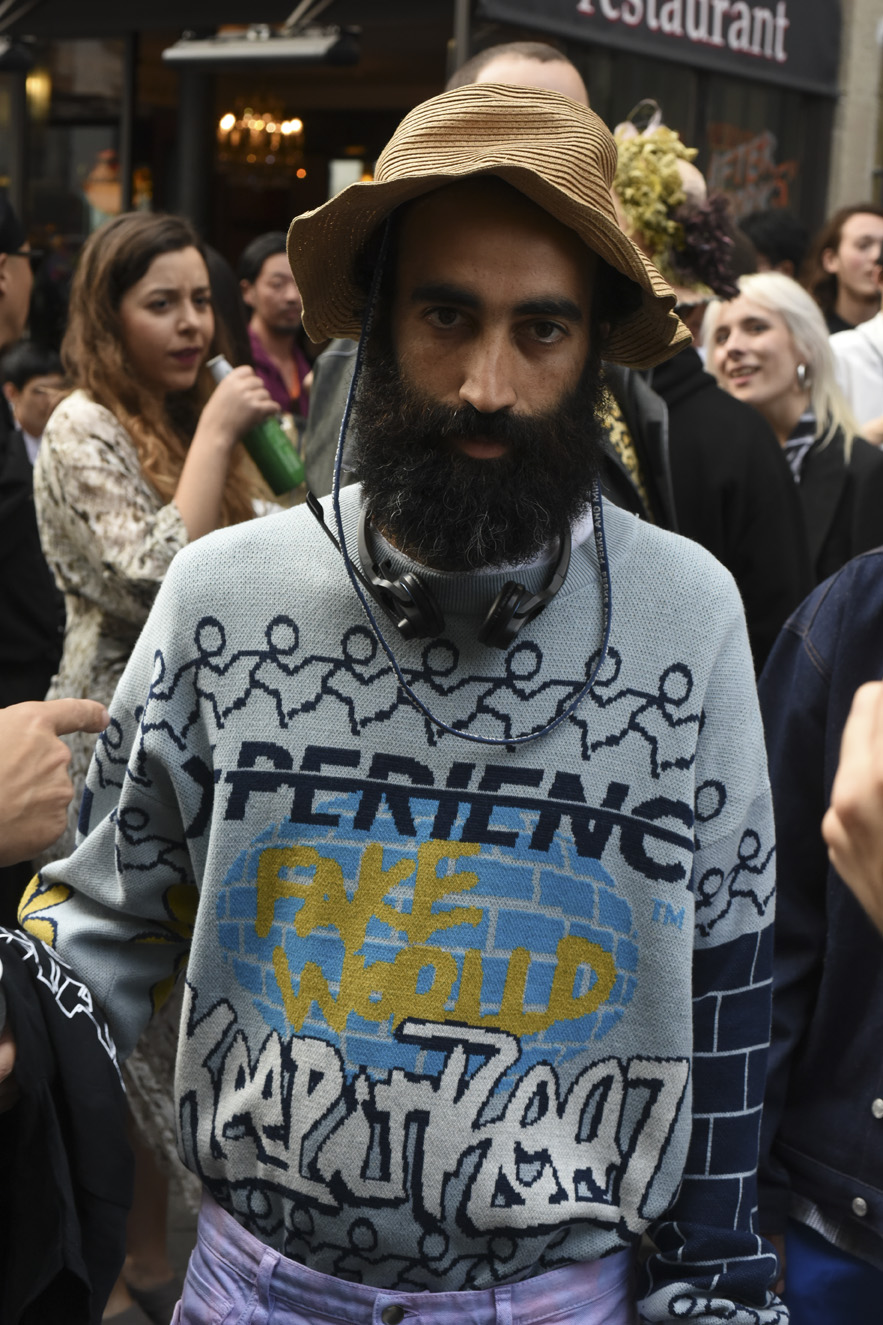 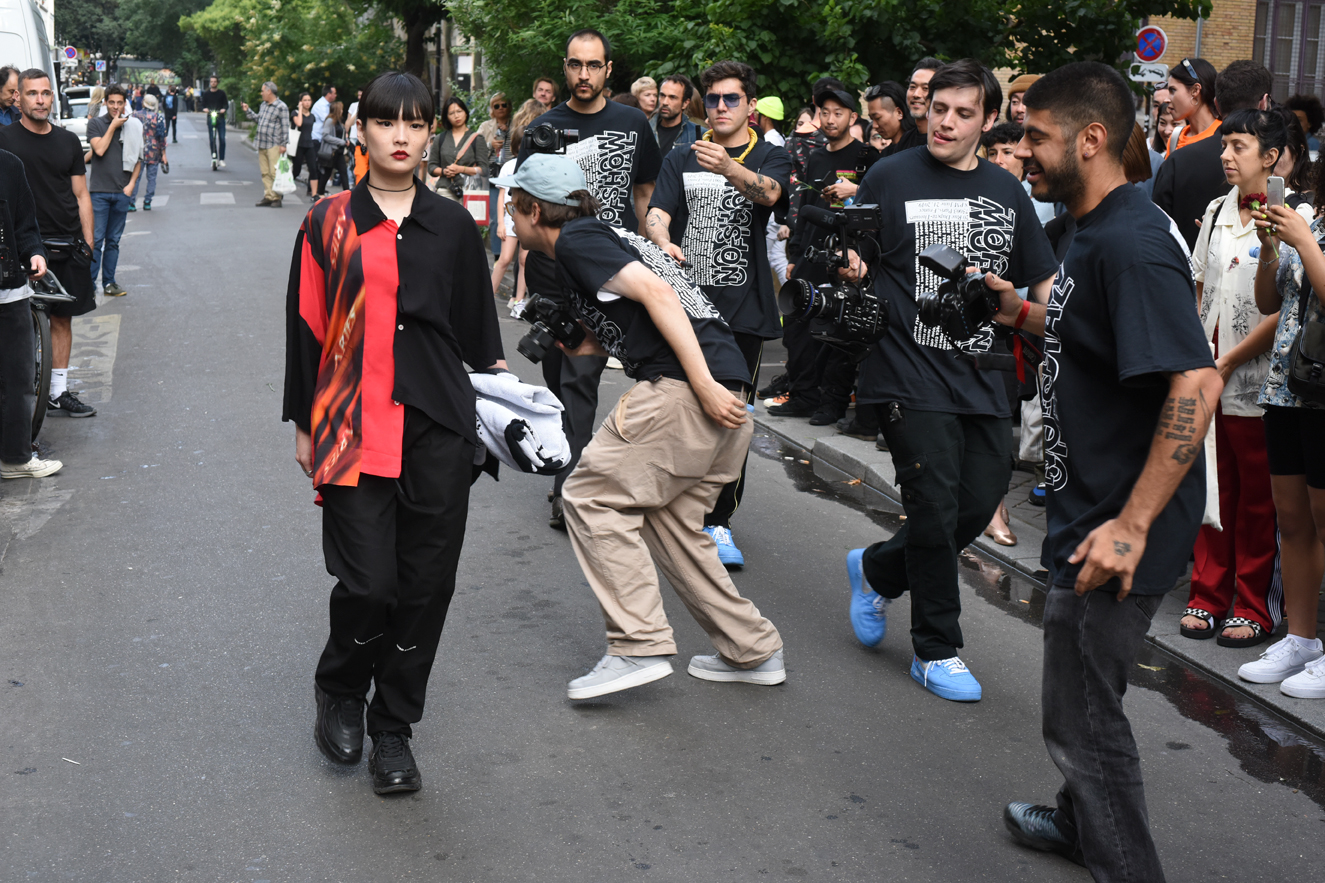 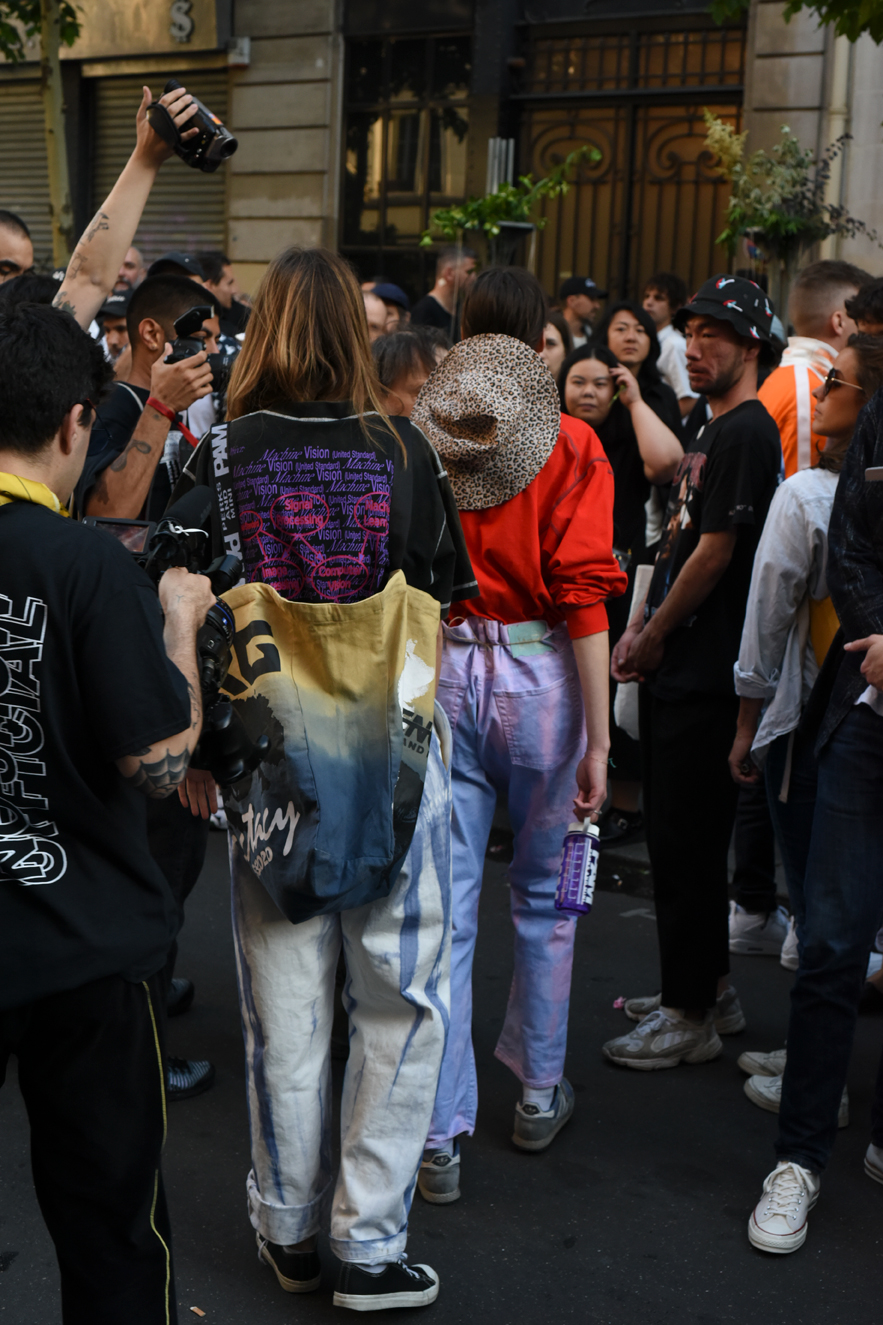 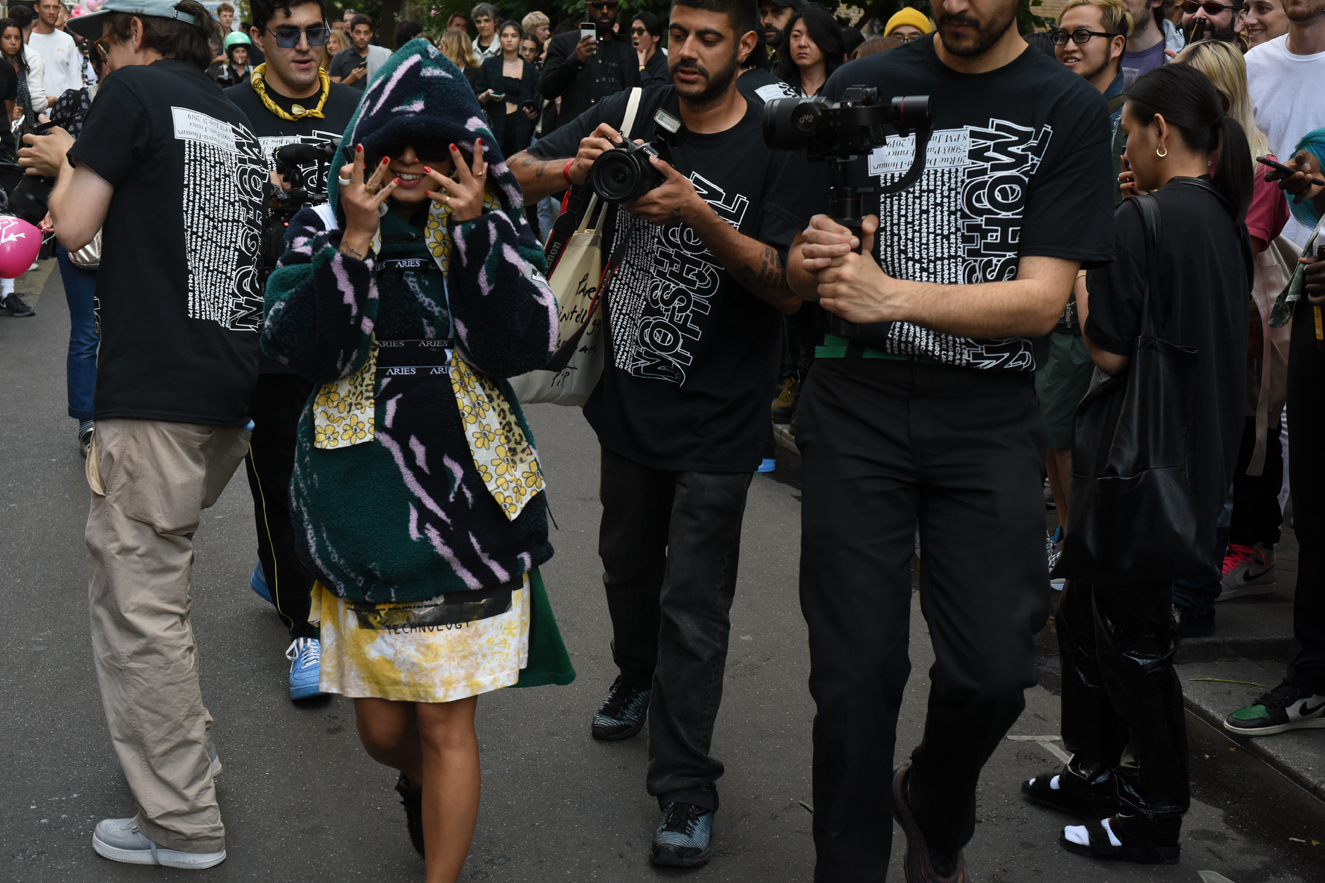 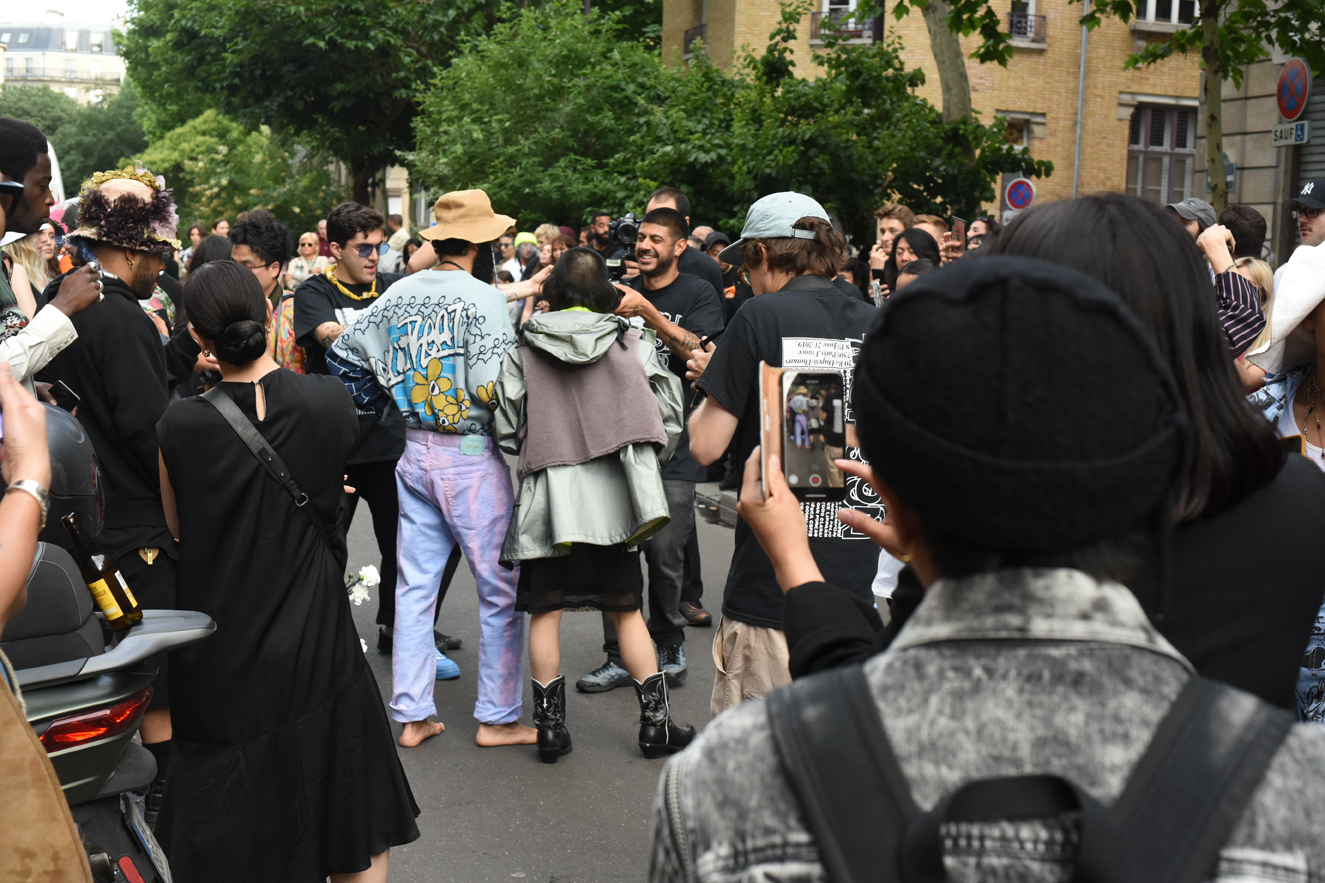 Has the pandemic, particularly the implications it has had for global logistics, impacted how you view the materials you use in creating your collections?

We found that one of the biggest logistical impacts was getting things from one place to another, with massive delays everywhere. Unlike some brands, we don’t ship materials halfway around the world just to sew them up and send them back again. There are planes full of clothes and fabric flying around constantly, it seems crazy, but it’s the nature of a global market. Luckily we have always tried to avoid unnecessary freight/pollution where we can, so our processes weren’t interrupted much. We are very thankful for that. 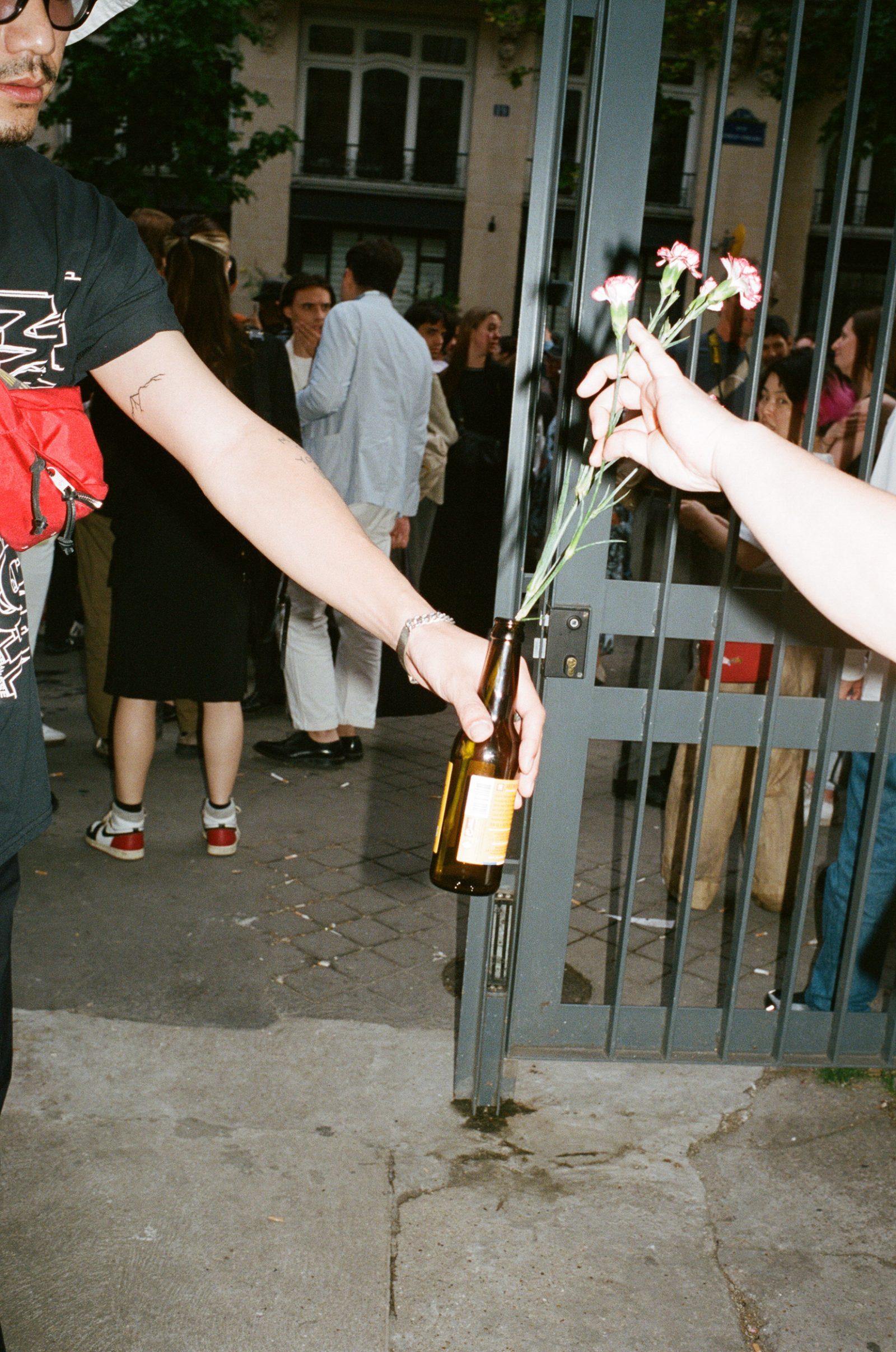 The last year and a half has been introduced many constraints, but also new possibilities. How have you sought fresh inspiration within new constraints?

Shauna: We started a free online platform called ‘Positive Messages’ in early 2019. We ask a wide variety of people to contribute anything positive they want to share. It was a reaction to a time when all the news and energy was so dark. I really like how it’s developed; you find recipes there, music mixes, ideas, information. It’s an online pick-me-up. In an effort to amplify the messages, we got together with Cali DeWitt (LA Artist and friend) to make ‘A Positive Message’. It’s a sustainable brand where we make re-cycled cotton tees and sweats as well as artist edition eco-minded collectibles. I think all of this has been a reaction to the times we are living in/through. 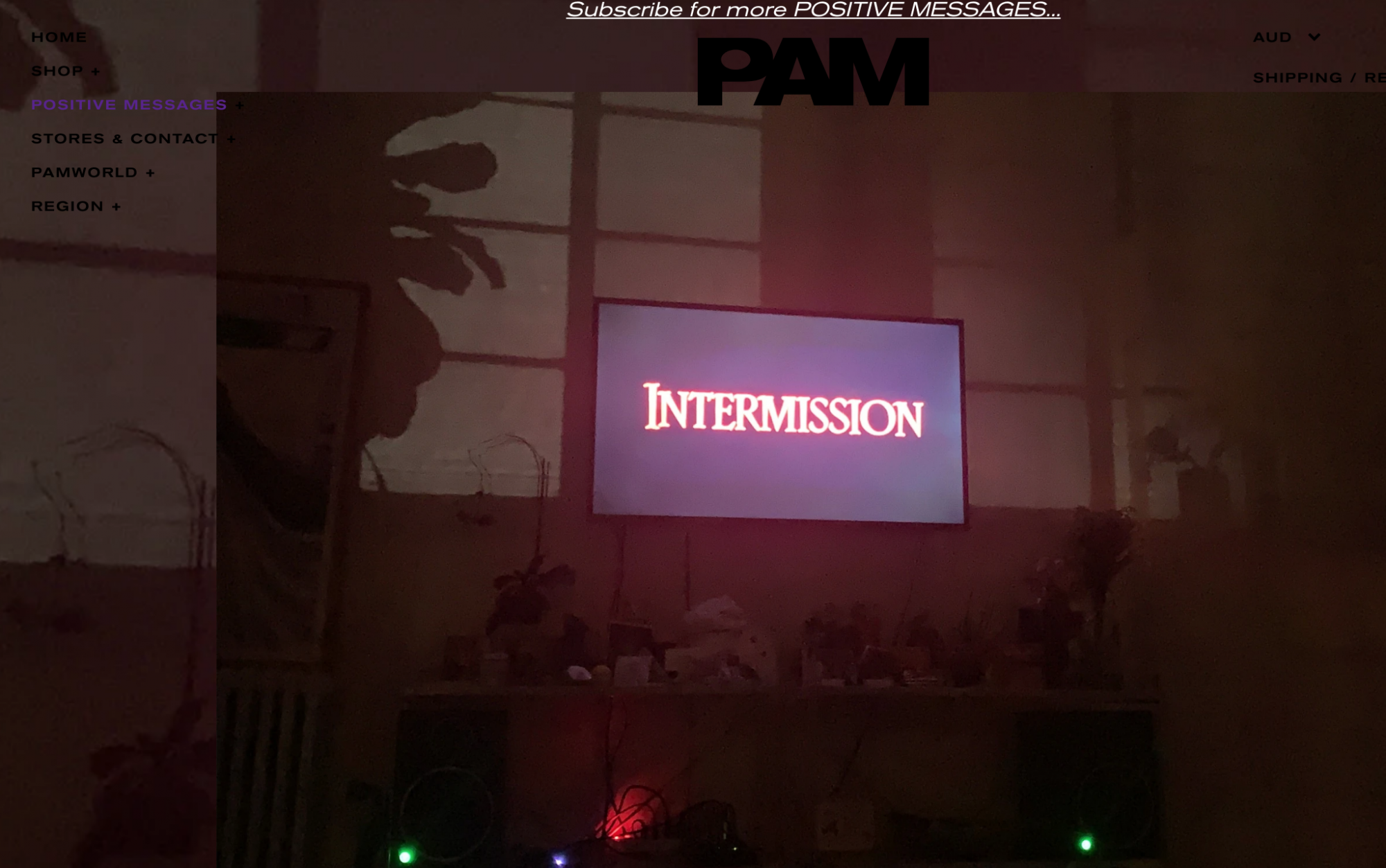 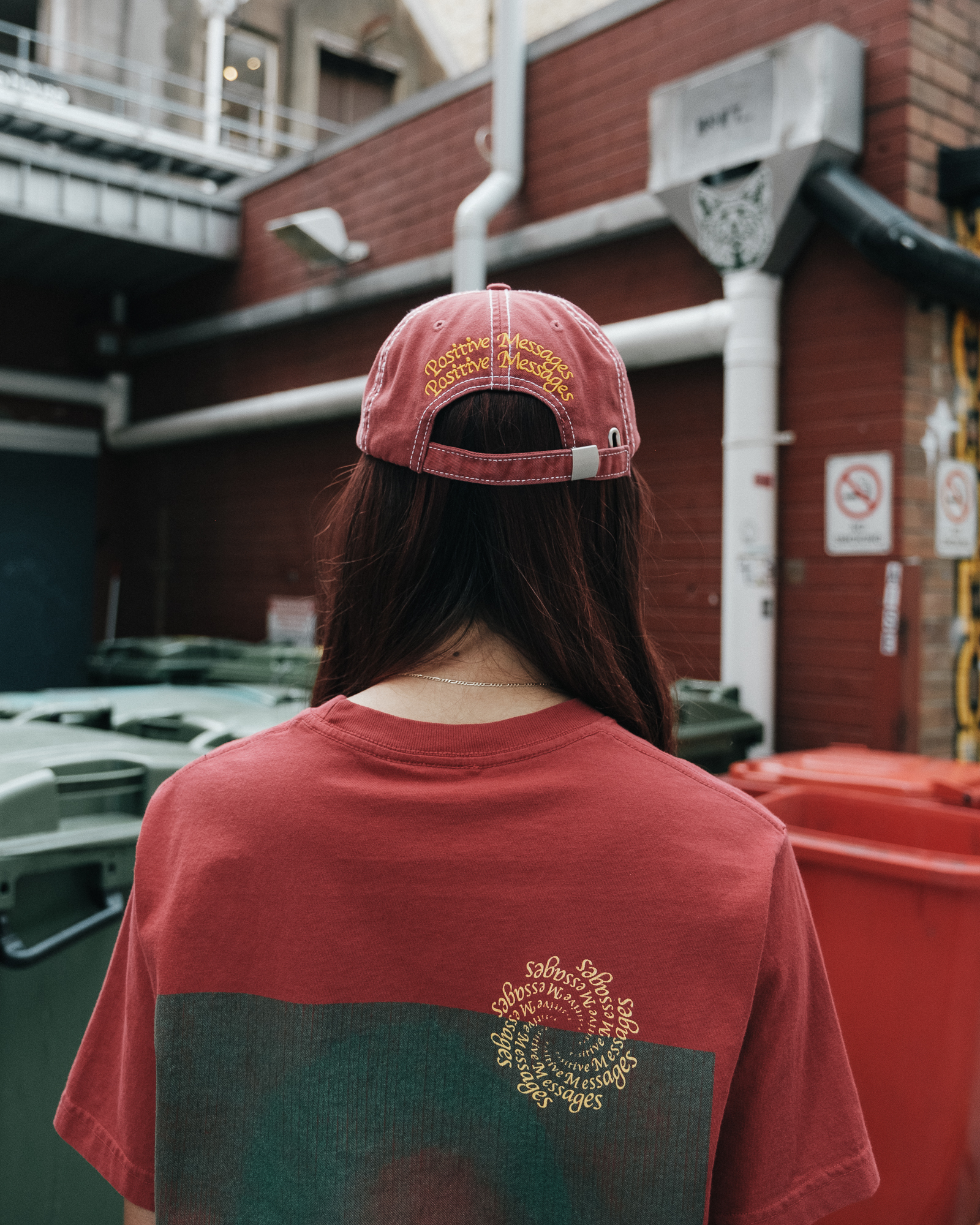 You’ve never restricted yourself to fashion per se; given the way your work seems to absorb and be absorbed in visuality of all kinds, P.A.M. has always seemed more like an interface than anything else. What kinds of projects beyond apparel are you imagining in the near future?

Shauna: Misha and I see P.A.M. as a voice, not as a clothing brand. Or even a brand. So in that way, it’s more fluid and we can work on a variety of projects in different mediums; it’s all part of what we do/what P.A.M. does. Recently we’ve realised a project with MAAP, a cycling brand based in Melbourne. We created a new line for PAM called ‘PAAM’ (MAAP backwards), which for us is breaking new ground in the cycling world and with cycling enthusiasts. Cycling has always been something close to P.A.M.’s heart. In the future, we have a variety of projects that we’re working on, ranging from design products in Milan to music festivals in Berlin. None of it seems out of place; it’s all just part of what we do. 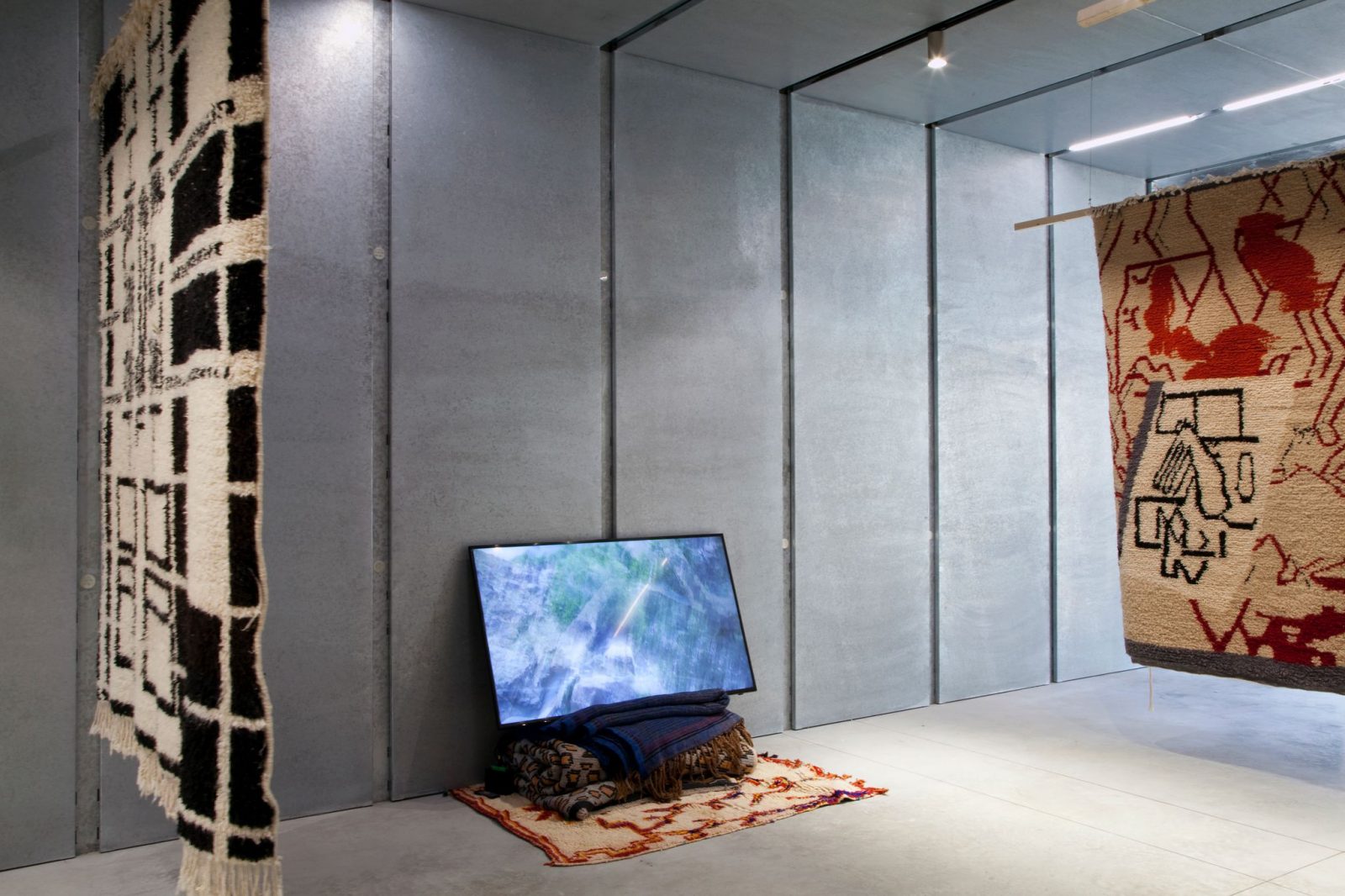 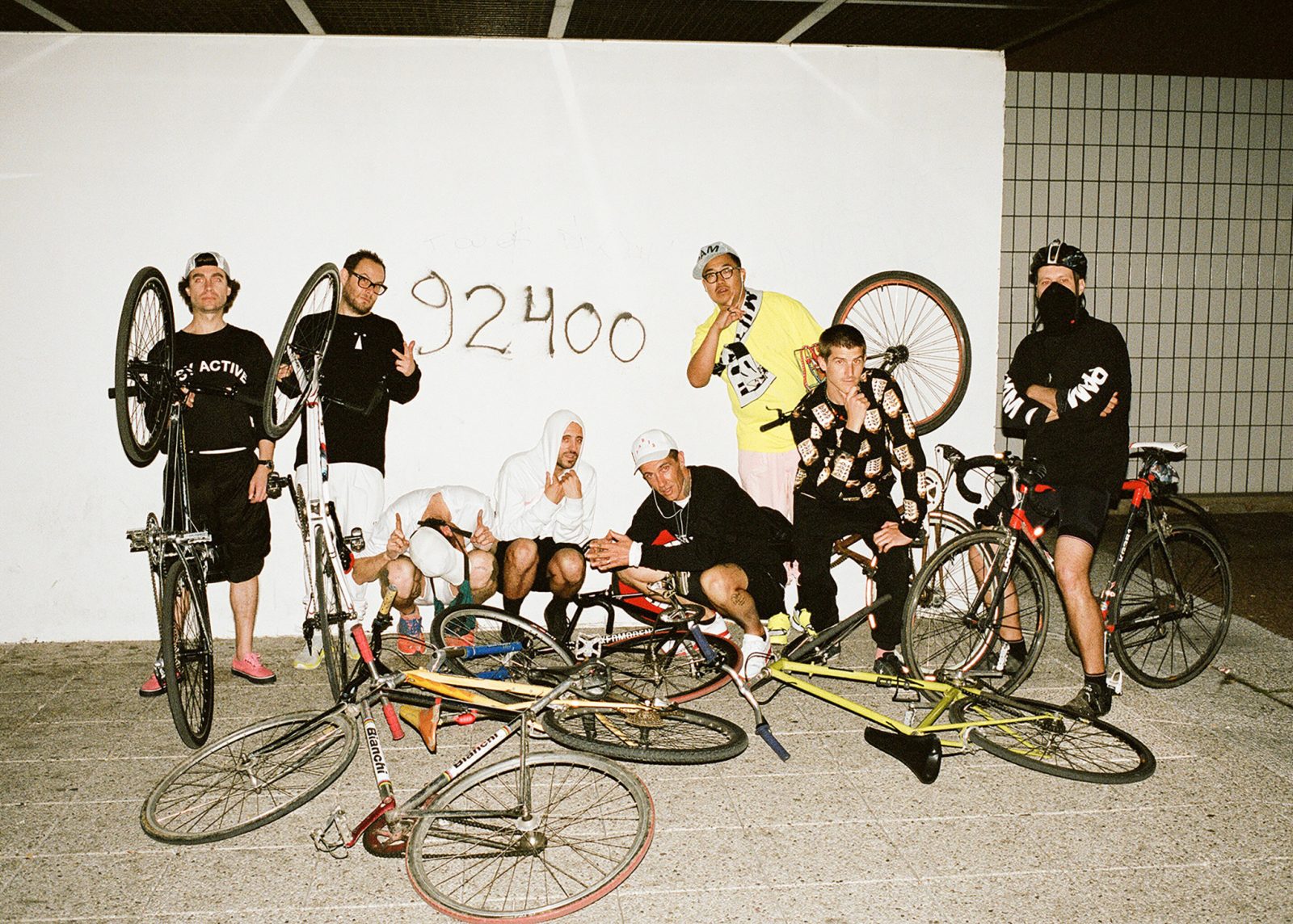 Can you tell us a little bit about the new AW21 collection, entitled “Good Life”?

Shauna: AW21 uses recycled polyester, organic cottons, and up-cycled deadstock, embroideries of corn and other vegetables, hidden meanings in logos, and a Travelling Scarecrow. Drawing from P.A.M.’s creative community, we’ve included work by NYC artist Peter Sutherland and Japanese typographer Kazuhiro Aihara too. I am very excited about this collection; it really expands on what we do well. 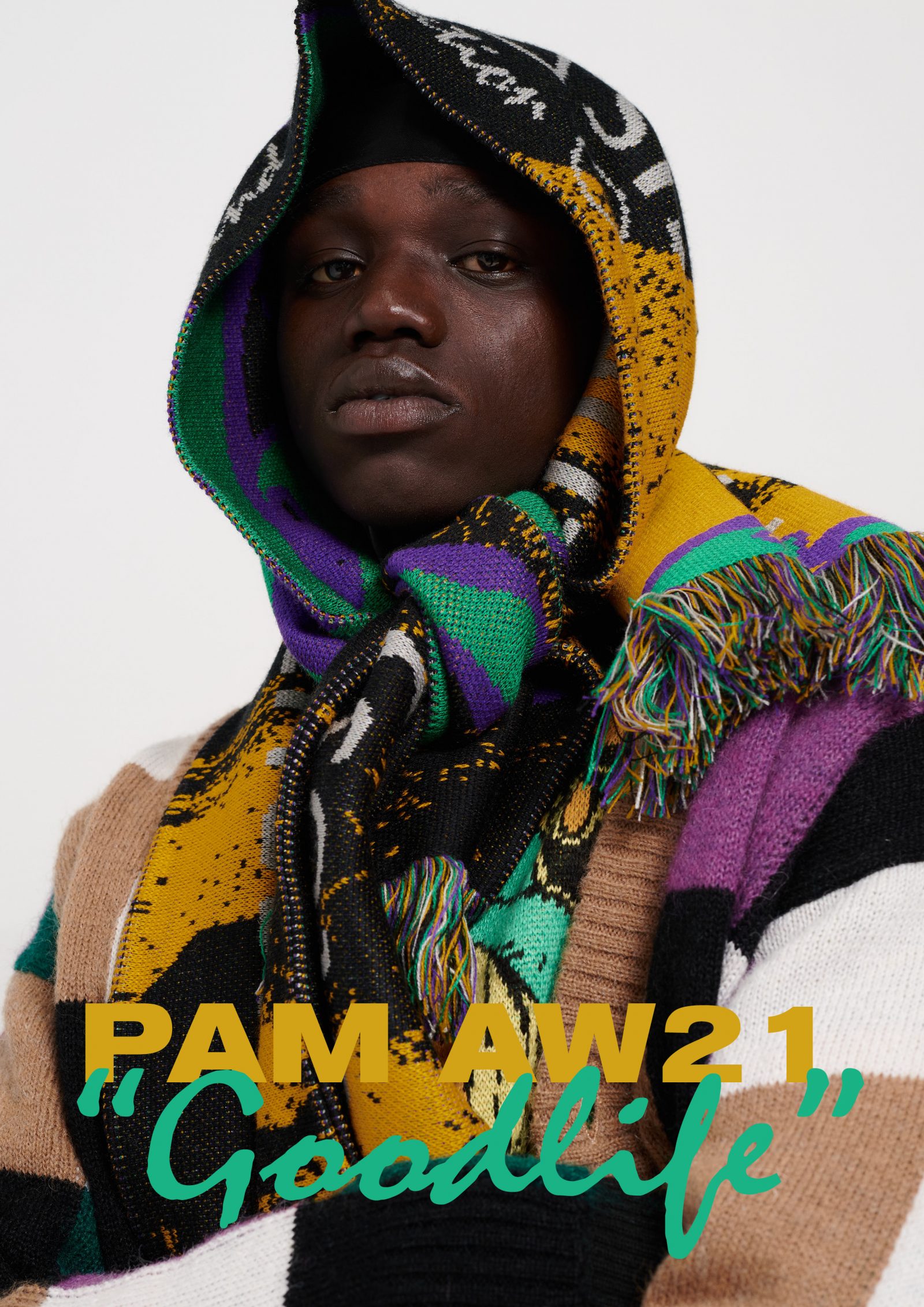 What are some of the sources of inspiration that gave life to these new designs?

Shauna: Mushrooms, scarecrows, walks in the outdoors, dinners with friends, dance parties in kitchens. All the things that make up the good life. 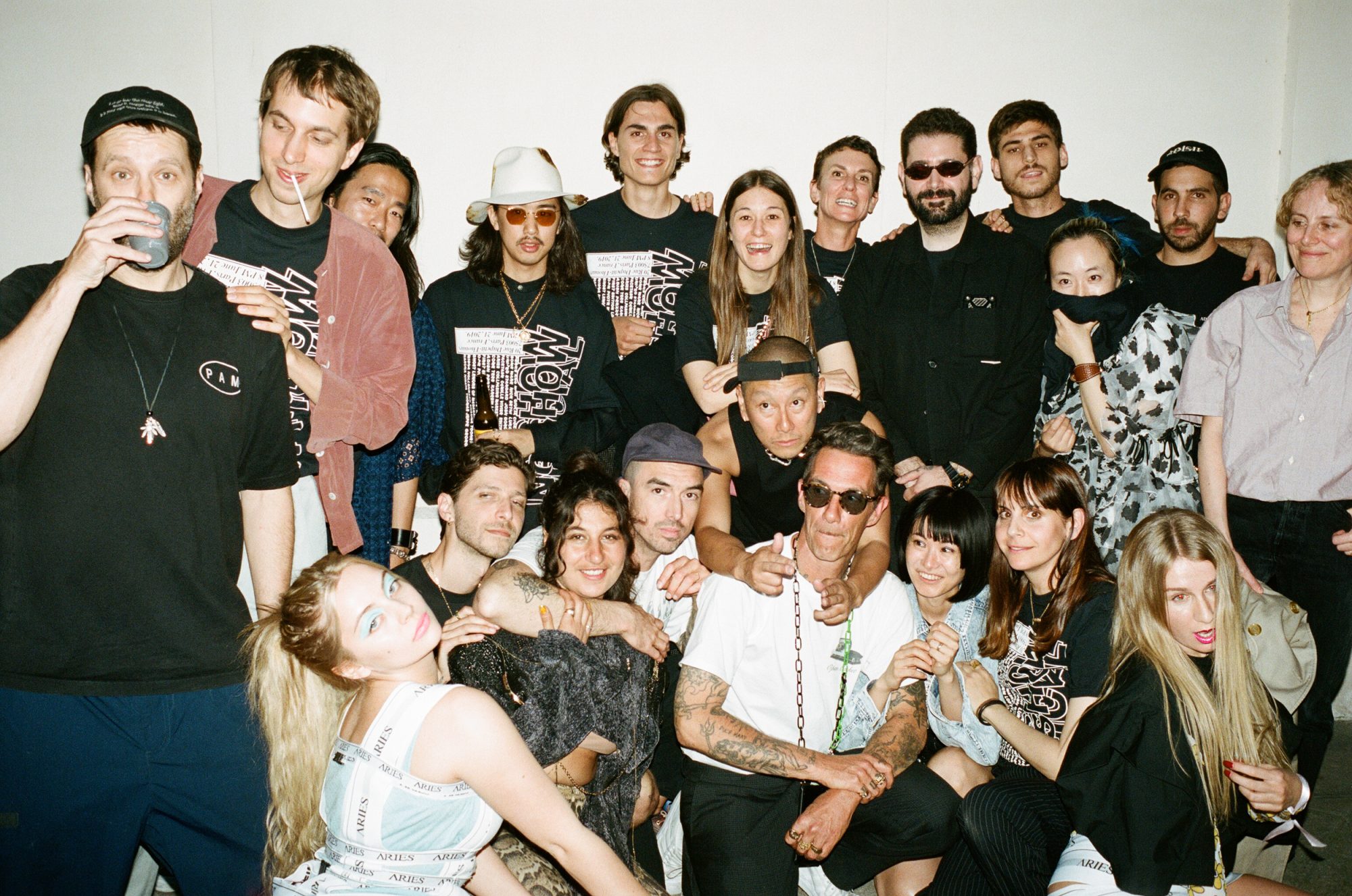